Once upon a time my husband did not like my potato kugel.  This is not my opinion; it’s a fact.  And I took no offense at his dislike…everyone’s allowed to be wrong about something.  And especially, within the realm of potato kugel, tensions tend to run high.  Kugel-eaters can be pretty adamant, and much like a Southerner takes personal pride in his grits or fried chicken, so too Ashkenazim take their potato kugel rather seriously. At the heart of the debate lay two issues:  how you like it and how you make it. Allow me to explain.

There are two kinds of people in this world.  There are those who like their potato kugel coarsely grated, almost shredded (I fall into this category…we like to taste the actual potato), and then there are those who like their kugel like a mush – finely grated or even puréed (my husband used to like it this way, and drenched in a pool of oil).   And never the twain shall meet – I don’t expect anyone who falls into the latter category to cross over to the other side. That is simply preference, but it gets much more personal still…

“That’s how you make it?”  I overhear an older seasoned kugel maker say to another ballubusta.

There are a number of things it could have been that she did differently, but the most controversial one is probably:  grate by hand or food processor?

A friend once told me that in her family it wasn’t a real potato kugel unless someone lost some skin!   Many contend that a hand-grated potato kugel is the only way to go and that it comes out differently than if you use the food processor.  However, in today’s busy era, most women simply don’t have the time for hand grating.  My personal compromise is using the fine (not course) grating blade of my food processor. Try both ways and you can be the judge!

No matter on which side of the debate you find yourself, here are some “tried and true” tips for producing great potato kugel:

If there was ever a potato kugel that I closed my eyes and dreamed of, it would have to be Rebbetzin Batya Goodman’s from Far Rockaway.  Once I had hers, I never looked back, nor have the hundreds of students and friends to whom I’ve passed it along.   Even better, neither has my husband  😉

Enjoy, and may this year be one of happy cooking, tasty blessings and the peace for which we all pray. 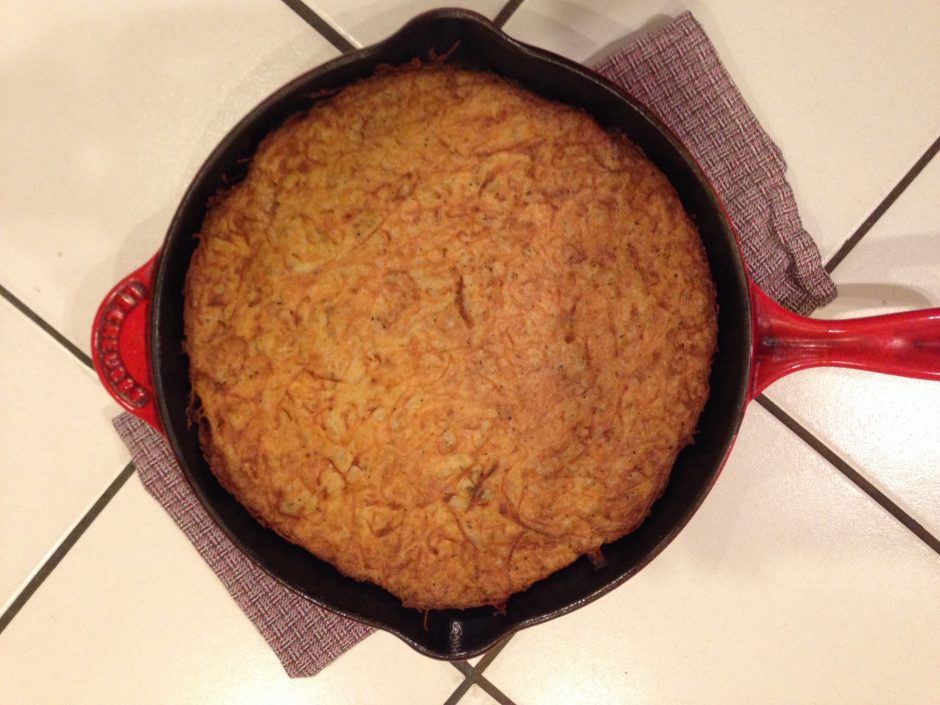 Preheat oven to 350 degrees.  Put oil in 10-inch frying pan and place pan in oven to heat the oil (the oil should be very hot when added to the potatoes).  Meanwhile, grate the potatoes and onions together.  Drain off and squeeze out any residual liquid that gathers on the bottom.  Remove the pan from the oven and pour the hot oil into the potato mixture.  Return the empty pan to the oven and raise the heat to 410 degrees.   Stir the mixture to blend and then add the eggs, salt and pepper.   Season to taste if any additional salt or pepper is needed (it should taste slightly salty).

Carefully remove the pan from the oven and pour the potato mixture into the pan, spreading it evenly. Place the pan back in the oven, and bake for 10 minutes.  Lower heat to 350 and continue to bake for 1 hour or until the top is golden brown.

View all posts by Naomi Ross →
Celebrate the Fourth…with Cake!
Get Soup’ed up for your Sukkah…